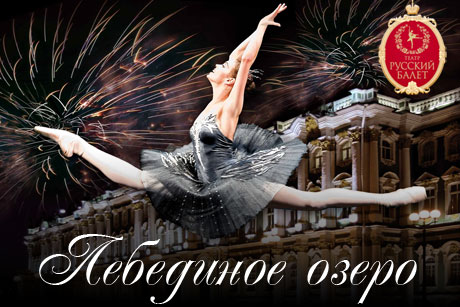 Children under 3 years of age (inclusive) are admitted for free (without a ticket), provided that they do not occupy a separate seat. From the age of 4 - it is necessary to buy a ticket at full cost.
At all events in the Hermitage Theater there is a free seating.
Tickets WITHOUT SERVICE CHARGE!

Swan Lake is the most famous ballet production in the world. Both the music and the choreography of this ballet have long been recognized as masterpieces, one of the brightest achievements of Russian culture. And the White Swan will forever remain a symbol of the Russian Ballet, a symbol of its beauty and greatness.
This performance occupies an important place in the repertoire of the Russian Ballet Theater, a fabulous story about the swan princess Odette and Prince Siegfried does not leave indifferent any spectator.
The ballet is accompanied by a symphony orchestra. The original choreography is carefully preserved. The immortal music of Tchaikovsky, colorful sets and costumes, the brilliant dance of the ballet troupe - all this attracts the attention of the public and provides full houses.

The ballet is accompanied by the Governor's Symphony Orchestra.

About the troupe "St. Petersburg Russian Ballet Theater": In the repertoire of the Theater "Russian Ballet" this play occupies an important place, the fairy tale story of the princess-swan Odette and Prince Siegfried does not leave any spectator indifferent. The original choreography is carefully preserved. The immortal music of Tchaikovsky, the colorful scenery and costumes, the brilliant dance of the ballet troupe - all this attracts the attention of the public and provides a full house. On stage - the artists of the theater "Russian Ballet". The theater was created in 1990 by soloists of the Mariinsky Theater, which belong to the dynasty of ballet artists, which has been in existence for more than 100 years. More than seventy world tours, more than 4,000 ballets performed for 23 years of the troupe's existence, about a million enthusiastic spectators who attended performances are all records in the world of theatrical art belonging to the St. Petersburg Theater "Russian Ballet". The basis of the popularity and relevance of the theater is the preservation of the original choreography of classical ballets, the professionalism of the company, the highest level of performance, colorful scenery and magnificent costumes. Summary: ACT ONE First picture A park. Away the castle. Prince Siegfried, in the circle of friends, celebrates his coming of age. Guests raise cups in honor of Siegfried, dance, have fun. The jester entertains the audience with funny dances. The prince is warned that his mother appeared in the park - the sovereign princess. Fun breaks: you need to hide the traces of a recent revel. The awkwardness of the jester, however, betrays everyone; he scattered the goblets. The princess is unhappy with the behavior of her son. On here the girls with a bouquet of roses run up to her. It softens the princess. After her departure, the fun resumes. It's getting dark. Guests leave the park. Left alone, Siegfried sees a flock of white swans high in the sky. The passion of the hunter awakens in him. Taking a crossbow, the prince goes deep into the forest. The second picture Lake in the forest. Proud white swans swim towards the shore. These are bewitched beautiful girls who take on a human form only at night. They are dominated by the evil wizard Rothbardt. Only one thing can destroy the evil spell - the power of selfless love. Siegfried overlooks the lake. He sees a white bird and pulls a bowstring. Another moment, and an arrow pierces the swan. Suddenly, the bird turns into a beautiful girl. This is the Odette Swan Queen. The prince is fascinated by the beauty of Odette. He is trying to hold her back. But Odette is afraid of the evil Rothbardt, guarding her. She trembles and slips away, lost in a round dance of girls. Siegfried swears on her eternal love. Siegfried’s love force touches Odette’s heart. She sees in him a savior from the power of an evil wizard. Dawn is approaching. The girls must again turn into swans. Odette tenderly says goodbye to Siegfried. White swans slowly sail down the lake. ACT TWO The third picture Ball at the castle of the princess, mother of Siegfried. Among the noble girls he has to choose a bride. But not one attracts the attention of the prince. All his thoughts, all feelings - only with Odette. Only obeying the insistence of his mother, Siegfried shows the courtesy of the girls invited to the ball and dances with them. However, he should stop paying attention to someone and give the chosen one a bouquet of flowers ... Suddenly sounds of fanfare. New guests arrived. The wizard Rothbardt appears at the ball. With him is his daughter Odile. The prince is amazed at her amazing resemblance to Odette. Rothbardt wants the prince to be carried away by Odile, forget Odette, and thereby violate the oath of love given to her. Then Odette will remain in the power of the insidious wizard. For this, he gave his daughter a resemblance to Odette, brought her to the castle. Odile beckons the prince, seduces him, Siegfried is fascinated by her charms. He announces to his mother that the choice fell on the beautiful Odile. He confesses her love. The evil wizard triumphs. At that moment Siegfried sees a white swan outside the castle window. The shocked prince realizes that he was tricked into breaking his oath. In desperation, he runs away to the lake, to his beloved. ACT THREE The fourth picture Night. On the shore of the lake are sadly drooping girls. They are aware of the misfortune that befell Odette. Runs mad with grief Siegfried. He begs Odette to forgive him, assures her of the strength and immutability of his feelings. But the enraged sorcerer Rothbardt appears. He convenes black swans and orders them to separate Odette and Siegfried. Siegfried comes to grips with the wizard. He is fighting for his love, for the happiness of Odette. In a brave battle, he breaks the wing of Rothbardt, and the wizard loses his strength: his power is over, he dies. Love defeated the evil spell. The rising sun illuminates Siegfried and Odette saved by him. Video: