Recital V.Gerello "For you, with all my heart ..." 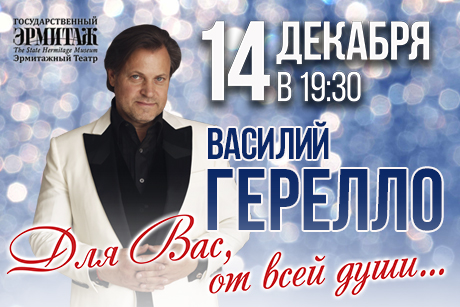 Performed by the soloist of the Mariinsky Theater will be popular arias and romances. The program and the full composition of the artists will be announced later In the performance of the famous baritone popular arias and romances will be performed. The golden baritone of the world opera Vasily Gerello began his career right from the stage of the Mariinsky Theater, although he was still studying at the fourth year of the conservatory. The debut was Valentine from the opera "Faust", after which there were Onegin and Rodrigo. The premiere of the opera La Traviata at the Mariinsky Theater was also performed by Vasily Gerello. Now the artist together with the troupe performs at the most famous opera stages: Opera Bastille, Metropolitan Opera, Covent Garden, La Scala and many others. In addition, he is an invariable participant of festivals and competitions, gives charity concerts. He works with many famous conductors: Valery Gergiev, Riccardo Muti, Bernard Haitink and others. Fans of Vasily Gerello have an excellent opportunity to hear their favorite artist in the cozy chamber atmosphere of the Hermitage Theater on December 14. The following people take part in the concert: Alexander Trofimov - tenor, Ekaterina Fenina - soprano, Regina Rustamova - mezzo-soprano The concert is accompanied by the Olympic brass orchestra